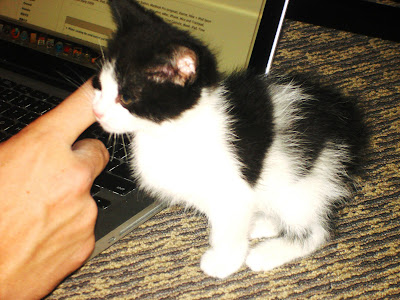 Meet our new addition to the family
kona.
Long story short, my grandpa who lives in Spanish Fork called Thursday and said that someone had dropped off and abandoned 7 kittens in his field and asked if we wanted one. I said yes so he picked the cutest one and sent the rest to the animal shelter. And let me say, he picked the perfect one. I am smiling ear to ear writing this because I am just so happy with her! She goes through cycles throughout the day: extra hyper, jumping, pouncing, attacking and playing with anything and everything (sometimes just the air around her) followed by a crash which involves her cuddling up to us and sleeping. The minute we brought her home she went potty in the litter box. Also, she has already taught herself to climb up anything, she will even try to climb up our bare legs which kind of hurts, but we let her try. She barely cries when we go to bed, and she is downright ADORABLE! We named her Kona because as you may know, Ed is a trithlete who aspires to one day go to the Ironman World Championships held in Kona, Hawaii. But that's not it....she has a black spot on her back that looks exactly like the Ironman symbol! I will post pictures of it later. When we saw it, we just had to name her Kona! Anyone who lives close is welcome to come over anytime to play with her, she would love it. Welcome to the Christenson family, Kona, we couldn't love you more. 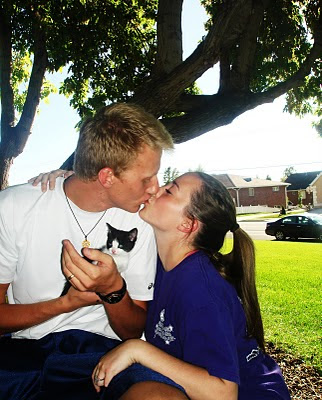