Yesterday while we were driving home from the Cassia Country Fair (which was as delightful as a fair and rodeo in southern Idaho can be), Ed and I were talking about the night we met for the first time. It was exactly three years ago last night, but oh wow, it feels like just yesterday. He was painting the walls of his new house that would be filled with 10 crazy boys from Burley. He had white paint speckles all over him and the first thing I noticed when I saw him were his blonde eyebrows. He only said about one sentence to me that night which included "Hi, I'm Ed" and when I asked him what scenario to act out in the game outside he suggested a proposal. I've always thought it was cute that the first thing he ever said to me was about a proposal. After that night, he didn't even cross my mind again until he called me later that week and had to remind me that "this is Ed, the tall one, let's go to a luau, and let's just make it official". I remember thinking, "official? does that mean it's a date? and who the heck is this Ed guy?" It is really odd to think back to when you and your husband were complete strangers to each other.

Imagine that: just three years ago he was just some tall guy with a great smile who was pretty goofy, but a really good kisser (that's how I described him to my friends) and now he is my best friend and my husband for eternity. What if I had known that night in 2008 that I would marry him? HA! It was definitely not love at first sight for the two of us and I'll leave it at that, but he won me over quick and I somehow seduced him into liking me back after our terrible first date. That time in both of our lives was hard for different reasons, but we found each other and something sparked.

Love is underrated. Marriage is flying out the window in this world, but how lucky am I to have found my mate so easily and so perfectly?

And then I ask myself why? Oh, the why questions will never stop for me. Why me? Why was it so easy for Ed and I? We hit some small bumps in the road and we're still hitting bump after bump, but it really is easy with us. We argue and stomp off to separate rooms, but an hour later we emerge from our stewing and I'm like, "Soooo, should we watch a show or something?" and he says, "Wanna play hand and foot?" We keep things simple. Two happy people and a cat.
I really love to reminisce. I am probably one of the most sentimental and sensitive people on the planet which makes it easy for me to get hurt, easy to cry (happy tears included), but best of all, easy to get lost in memory after memory of the good times in my life. The fall of 2008 was by far one of the best times in my life and I will remember it forever. It is crazy to think that it was my first semester of college and I will be starting my last semester in just a week.

Anyway, life is great right now. I am being blessed left and right with opportunities at work, wonderful people in my life, and I really feel like I'm on the right track to greatness. There is so much to stress about, but you just take a deep breath and realize that there is so much MORE to be thankful for. 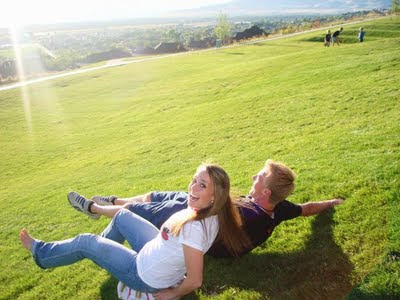