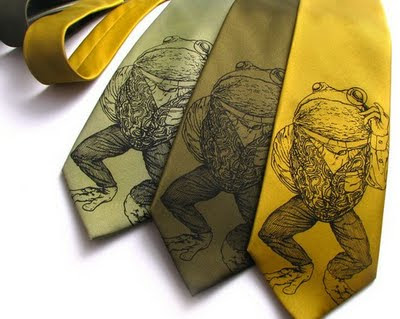 Are these toad ties not awesome? the answer is yes. Had to spice this babble post up with something.

Well I have a feeling I am going to love this semester. My classes seem pretty awesome and fairly challenging, but not too hard. I have some great teachers from what I can tell so far and I have two classes with Tess and one with Ed! It should be pretty fun.

The other day, Ed kept looking over at me in our philosophy class with this disgusted look saying, "you existentialist" as if I was some devil or crazy person. I was so confused why he was acting so disapprovingly of me and sneering and shaking his head in dismay. After class he told me that in one of his previous classes that day he learned what existentialists are and he did not approve of me being one. His description was as follows: raging sex addicts who live in communes, do drugs, shun their families, friends, or anyone who is going to hold them back from their entirely selfish desires and pleasures. They steal, plunder, orgasm, get high...anything that will keep them satisfied for a bit.

HA! No, Ed. I am pleased to inform you that I am a very mild version of an existentialist. Not to mention Christian. With morals. I mostly just believe in making your life meaningful. If the sex addicts want to have sex addictively, they can. But as for me, I will find meaning in my own moral, religious, pleasant and helpful way.


Phew, glad my husband no longer thinks I belong in the 60's and 70's with Charles Manson.

He's a funny one, that Ed. He keeps surprising me lately. Last night we are laying in bed. I am positive he is asleep and I'm just laying there like normal pleading with Heavenly Father in my mind to help me fall asleep. All of a sudden he rolls over and says, "Thank you for letting me do this tomorrow." I was sure he was talking in his sleep so I tried to get more talking out of him so I could get a good laugh. He goes on to thank me for letting him get up early to go volunteer at a triathlon. I was really confused why he would be thanking me for that and he says, "because I might wake you up early on your one day to sleep in". Haha, interesting logic there Ed, but thank you for taking the time to thank me even though I don't deserve a thank you.

But here's the big surprise: This week he asked me, "Have you noticed me lately?"

Wait, What? Wow, I must have really been neglectful this week. It caught me totally off guard because usually I'm the one acting like I'm starving for attention. I'm always the needy one annoyingly asking for massages, backscratches, venting about my job for 30 minutes straight until I realize he stopped listening at the 5 minute marker (and I don't blame him). Stuff like that. So when he asked me if I had noticed him, I knew it was a big deal. Dang it. Terrible wife right here. But hey, sometimes you go through waves of being good and sometime you suck and it's just the way life works. I've definitely got to be better though. Any suggestions?

I guess it's good to be surprised by your husband. Being married, you get to know each other so well, too well sometimes. I know exactly what will make him mad, happy, or annoyed. I know when he will probably tune me out when I'm complaining, but I keep going anyway to make myself feel listened to. I know when he wants sexy time and he knows when I don't want it. Don't cringe, it's just real life. He even knows now that the only reason I shave my legs is because I've finally broken down to him feeling them at church and giving a long drawn out sigh of disappointment. To know all of that is awesome and fun, but to be surprised is pretty refreshing. I guess it would suck to be surprised in a bad way, like you're just now figuring out that your husband is a cereal killer, but in my case, I'm pretty thrilled to be surprised by Ed in such simple but sweet ways. Thanks Ed. I love you and I notice you. You don't need to thank me for "letting you get up early" but I appreciate it. Now I need to surprise you.
Posted by Ed and Amanda at 11:33 AM